High prices for life saving medicine isn't cool. So how could it get worse? Try the blatant misuse of coupons (or "savings cards") to cover up and hide the extortionate pricing of medicine.

You've probably heard about by now the EpiPen fiasco. It's an Epinephrine autoinjector sold by Mylan. Epinephrine is the only treatment for a severe allergic reaction known as anaphylaxis, which affects up to 1 in 50 Americans. If left untreated it can be fatal.

Except it's a bit worse and much more insidious than this.

Mylan, the company producing the EpiPen, has been lobbying hard over the last few years (Bresch's father is Sen. Joe Manchin III, D-W.Va). Mylan was a corporate sponsor of the Food Allergy Research & Education lobbying group that helped push through the 2013 School Access to Emergency Epinephrine Act, which required schools to buy and maintain a supply of epinephrine auto-injectors.

Yep. That's right. Push the price through the roof, past the point of affordability, and then create a law that makes all the schools buy them. Don't get me wrong here, schools should have them, but they shouldn't be forced to purchase life saving medication at unrealistically high prices set purely in the pursuit of corporate profits. If a drug is mandatory then most favored nations-type pricing should apply. This is where everyone in a mandatory purchasing situation gets the benefit of the lowest negotiated prices.

A life-saving drug does no good if the people who need it cannot afford that drug. - Senator Bernie Sanders

Here's the thing - those high prices that Mylan is charging in the US aren't reflected anywhere else in the world. Americans are once again being blatantly gouged over life saving medicine purely for corporate profit. 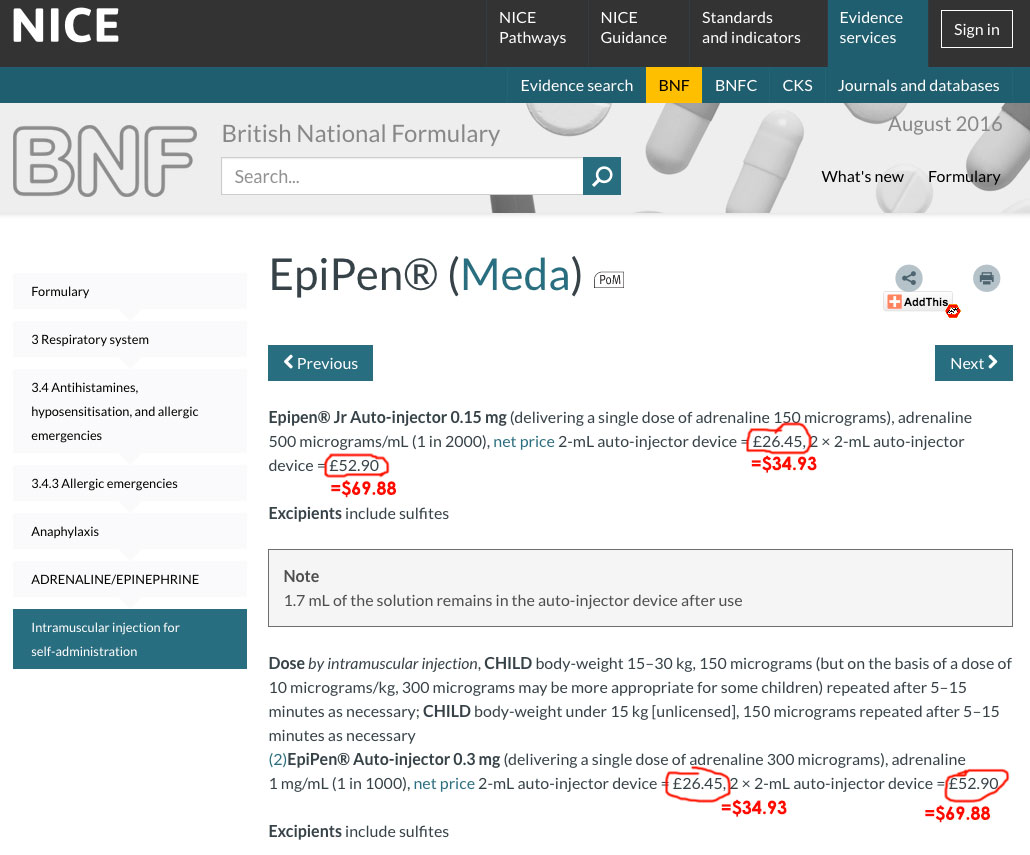 The publicly available prices from the NHS in the UK [requires UK IP address] (which, I assume, is the wholesale cost to the NHS) show that the cost of a single EpiPen is less than $35 (USD/GBP exchange rate on 8/25/2016). A two-pack is less than $70. You can find other UK web sites selling EpiPens to the public for less than double those prices and that includes the shipping and sales tax. These are still lower than the 2007 prices in the US.

It's possible to lower the cost even more. King County Emergency Medical Services in Washington state have put their own injector kit together for about $15. The medication can be replaced for about $2.50, and they estimate they save $250,000 annually.

Mylan's promotional "savings card" is yet another pharmaceutical coupon providing a code to the pharmacist for a pseudo-discount on a heavily overpriced product. There are also the usual (terrible) limits and restrictions on who can use it. It's not valid for Medicare, Medicaid, or any other state or federally funded benefit program (so the taxpayer can be forced to pay full price for it). It's not valid if you have no insurance (which is the entire point of a needing pharmaceutical savings card).

The EpiPen savings card can be found here:
https://www.epipen.com/copay-offer/

The Washington Post have a more in depth article here:
https://www.washingtonpost.com/news/wonk/wp/2016/08/25/under-pressure-m…